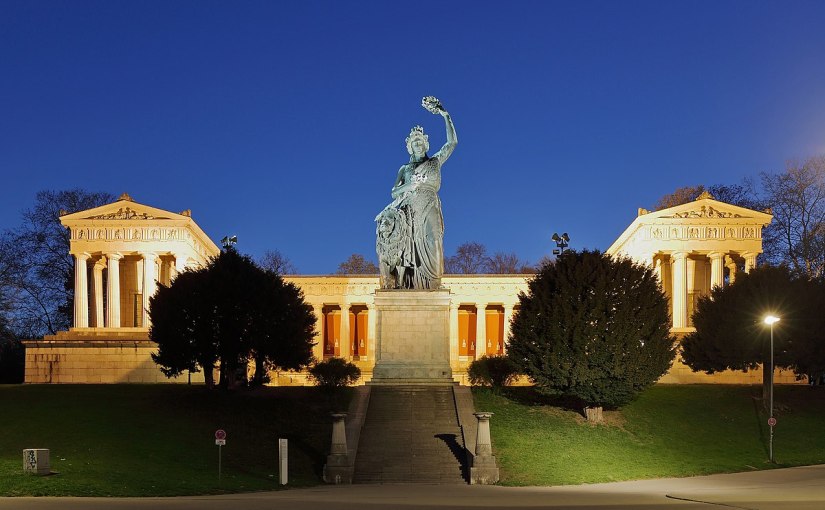 Munich is known first and foremost for its annual Volksfest that attracts six million visitors from around the world, a number that makes you question its “folksiness” – but whatever. Tracing its roots takes you back to – where else? – the Alter Südfriedhof (the old cemetery in Munich). Many of the institutions associated with this sprawling, brawling two-week party took shape under the leadership of men buried right here.

From royal nuptials to brass bands

It was the celebration of the wedding of the crown prince of Bavaria, Ludwig I, to Therese of Saxony-Hildburghausen (try saying that with a mouthful of chips) that inspired the Oktoberfest tradition. The idea for it came from Andreas Dall’Armi, a member of the Bavarian National Guard, who is also buried in the Alter Südfriedhof. Thus the festival known all over the world as the quintessence of Bavaria was founded by none other than – an Italian.

The wedding and first Oktoberfest both took place in 1810. You might think its beginnings were linked to beer, but food and drink were an afterthought to the real attraction: a post-nuptial horse race. Dall’Armi, who was an Italian officer of the Bavarian cavalry, hatched the idea. I guess it’s not too surprising that an equine-minded cavalier would come up with the idea to hold a horse race. As they say, a man with a hammer sees nails wherever he looks, so it follows that a guy on a horse looking down from the saddle imagines racetracks at every bend of the road. One can imagine how the idea fermented (to segue into our next topic) in Dall’Armi’s mind:

“I’ll race you around the camp!”

“Cool! But no fair, your horse is bigger than mine!”

“Wouldn’t it be fun to get the whole team to race? Officially?”

With that, Dall’Armi galloped off to the crown prince with a novel suggestion on wedding banquet entertainment. Beats the hell out of a brass band, he said. Might even go down in history, you never know. But I wonder if the future Queen Therese was as keen on the race as the boys?

The name of the city of Munich derives from the phrase forum apud munichen, the place where the monks live, who so shaped the city that their image lives on in the city’s coat of arms, known as the Münchner Kindl. Monasteries, of which Munich had many, were known for brewing beer. In the Middle Ages, it was a culinary staple, a kind of liquid bread.

But lest you conjure up visions of giddy monks carousing through the refectory, you should know that in those days, beer was not distilled and therefore much weaker. Dünnbier, thin beer, was often brewed at home, had little alcohol and was consumed by adults and children alike. Beer had the advantage of being safe to drink: People knew that drinking water was often unpotable even if they didn’t know why. Many of the later commercial brewers also found their resting place in the Alter Südfriedhof.

Schwanthaler is the name of a street used by the traditional parade that kicks off the Oktoberfest every year, named after one of the city’s preeminent sculptors. Very fitting, since Ludwig Schwanthaler created the model for the Bavaria statue, the local version of the Statue of Liberty that towers at one end of the Theresienwiese, site of the Oktoberfest.

The Romans, who once occupied this area of Germany, named it Bavaria. But the locals called it Bayern, deriving from Bajuwaren, its original Celtic inhabitants. As a foreshadowing of their future conservative nature, the Bavarians never wavered from the name Bayern, still in use today, while foreigners use the more modern Roman name, Bavaria. One wouldn’t want to rush these things.

The Bavaria statue is flanked by the Ruhmeshalle, the Hall of Fame, containing busts of famous Bavarians. King Ludwig I commissioned his court architect, Leo von Klenze, to construct this majestic building. Von Klenze made the neoclassical style famous in Bavaria with his many works, including the buildings that grace the Königsplatz, the square designed by Karl von Fischer.

The Hall of Fame sits atop a grassy hilltop, towering over the fairgrounds of the Oktoberfest. It may have been built in honor of Bavarian luminaries whose busts grace its walls, but its location is better known to Oktoberfest party-goers for what are called, tongue-in-cheek, Bierleichen, or beer corpses. This is the name given to visitors to the Oktoberfest who underestimate the strong, one-liter glasses of beer or their own drinking capacity (or both) and wind up sprawled on the grass to recuperate from their drunken stupor.

Finally, let’s return to the first installment of this four-part series. It told how the scientist and doctor Max von Pettenkofer campaigned for years for proper water sanitation. It was nothing short of revolutionary, putting an end to centuries of contaminated drinking water and the disease and death it brought with it. I will therefore end this series with a photo juxtaposing the graves of public hygiene hero and the Pschorr brewer family. Nothing against the occasional brew, but the majesty of the brewer’s grave rather dwarfs that of this important scientist. It does seem a bit out of kilter, does it not?

A visit to the Alter Südfriedhof is nothing short of a stroll through centuries of Munich’s history. Now that you’re fully informed, grab a sandwich – and an umbrella – and head over there on your next visit. There are plenty of benches on the grounds for you to sit and contemplate the days of yore. You’ll be glad you did.